Nicki Harvey looks at the double-life of the brushtail possum. 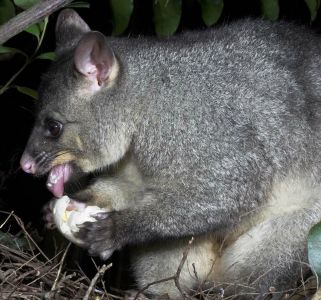 Kiwis and Aussies view their possums in quite different ways. The attitude of Australians to possums can be seen in that ‘getting up close and personal’ with brush-tailed possums is a popular option for visitors to the huge Australia Zoo, on Queensland’s Sunshine Coast. Asian visitors to the 100 hectare park are especially fond, it seems, of baby possums (named ‘o-possums’ across the ditch), and koalas, both of which are seen there as cute, cuddle-able ‘tree bears’. The Zoo’s brochure asks whether ‘Bettina’, the 4-month-old orphaned ‘joey’ possum is possibly the “cutest little creature you’ll see today? Isn’t she gorgeous?” gushes the caption of the photo of a young tourist clutching the kittenish creature, exhorting guests to…“Have a special experience where you may be lucky enough to hand-feed our little beauty treats of grapes and blossom.” (for only $30 per person).

The fact that the Australian version of our possum is indigenous to that dry continent means that their flora and fauna has evolved to co-exist with the tree-bound marsupials, but in New Zealand it is an introduced pest. Here, 6.5 million hectares of greener, lusher, sweeter native bush cause a feeding frenzy on our forests, night after night, week after week, year after year. Possums chew through 21, 00 tons of ‘blossoms’, green shots, berries, fruits and leaves of New Zealand forest every night, the equivalent of 190 million standard hamburgers.

The attitude of New Zealanders to possums can be illustrated a well known TV advertisement, which uses them as a way of illustrating how you might react when faced with a potential accident.  A serious-sounding dad, giving his daughter a driving lesson advises her NOT to try to avoid hitting a possum in the road. ‘Keep going straight”, he instructs her, “it’s either us or the possum!”

Possums in New Zealand threaten the health of dairy cows by carrying and transmitting bovine tuberculosis and are seen as flea-ridden, vicious killers that predate on the nests of endangered, helpless native bird species and destroy our native forests. 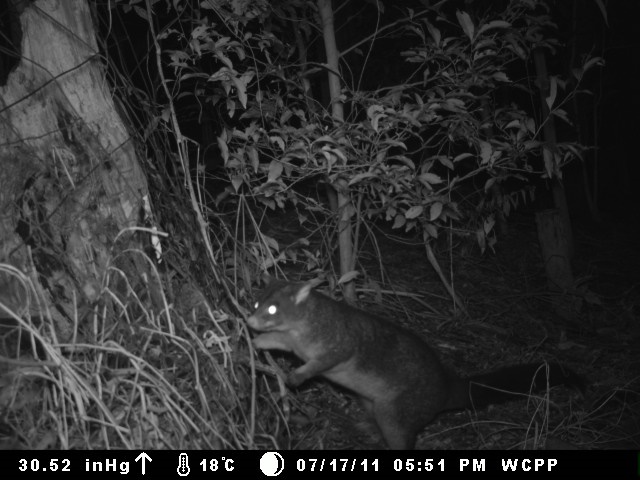 The New Zealand Department of Conservation has been conducting concentrated pest control using 1080 in some parts of the country, but their campaign covers only 40% of the regions populated by possums. ‘We are winning battles, but losing the war’, says Forest and Bird Society’s Northland Advocate, Dean Baigent- Mercer, who speaks of ‘rampant possum damage’ to rata, pohutukawa, puriri and totara which ‘are dying of neglect’.  He asks, “What kind of native forest do you want in the future? Do we want lush canopies of trees or the skeletons of forest giants? The nights that were once loud with the call of kiwi are now dominated by the screeching of possums as they consume the forest. They are a pest of plague proportions.”

It will many years, if ever, that Australians and New Zealanders will view the (o) possum in the same light.

Nicki is a keen conservationist with a special interest in saving our native birds.  After a visit to Australia Zoo, she was very surprised at their attitudes to our ‘pest’ the possum and wondered how many other New Zealanders knew about its double life too.  Nicki would like to study journalism and this is her first article for KCC.