Waihau Beach, a great campground with a fantastic beach. This beach is filled with so many
treasures, alive or not alive. On this beach, you can find a very special bird called the northern
New Zealand dotterel, also known as tūturiwhatu in te reo Māori.

In Aotearoa, there are only around 2,500 dotterels left. That is less than some species of kiwi. Dotterels are endemic to New Zealand, which means they are only found in New Zealand! Every year my family and I camp at Loisels. We like walking down the beach and counting how many dotterels we can see. There are around 15 where we camp. Not long ago, we spotted a pair that had 3 babies, which doesn’t happen too often!

Dotterels are almost always found in pairs. Their breeding season is from September to February,
and they start nesting around December. These birds nest in the sand, which makes them very
vulnerable. The tide sometimes washes their nests away, or an animal — such as a dog or a
possum — might eat or destroy their nests. The eggs could also be trampled on, or driven over.
Poor dotterels!

Dotterels are one of New Zealand’s very special taonga (treasures), and I hope to
see many more in the future! 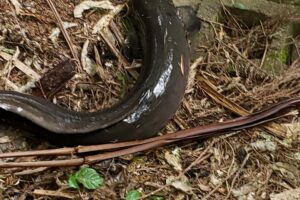 Kāhu is keen to find ways to help remove plastic[...]