By Chris (age 11) from Howick Intermediate

“Pūkeko” is the Māori name for the purple swamp hen, and I think they’re pretty cool.

My grandparents live right next to a river. When I go for sleepovers, I see the pūkeko come up and peck at the lawn. I see a lot of pūkeko when I stay there.

I like the way their blue feathers shine in the morning sunlight, and the way they walk down to the river and wade in the shallow water looking for crabs.

There is a walkway close to my house which has a river right next to it. When we go for bike rides, they are just walking around in the bushes next to us. Sometimes they run across the path, so we have to slam on the brakes. They even flap their wings and kind of jump to get out of the way of people on their bikes.

Some pūkeko can be quite friendly. I have found this when we go to places like Western Springs pond. With all the people around, they get used to seeing people. They also get fed bread which is not good for them but it does mean they become less scared of humans. Since pūkeko hang around at the public park, pūkeko also seem to eat the rubbish people leave behind.

Although pūkeko have become some what friendly, I still think they should stay wild and people should not feed them stuff that is bad for them like rubbish and junk food, so that they can live longer. That way we can all enjoy their funny nature and interesting habits. 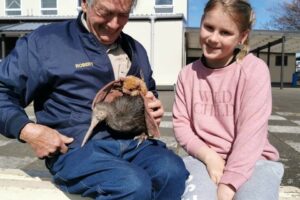 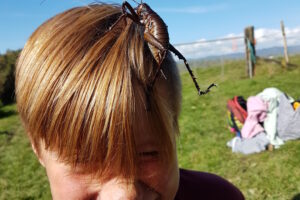 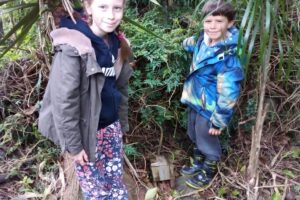 Taking care of the Earth | Te tiaki i te Whenua