KCC member Finn has a pretty amazing back yard.  Read his report on who came to visit.

In January I helped welcome 100 Fairy Prion chicks to Mana Island. As part of my learning at home, I went up to the southern end of the island with my Dad (Jeff Hall) who is the ranger here on Mana and I interviewed Helen Gummer, a freelance consultant specialising in seabird colony establishment and chick translocations and Dad about the translocation.

Helen explained that they feed the chicks every day a sardine smoothie using a syringe and tube. The volunteers mix water, oil and sardines in a blender and warm it up using one of those Easi-yo yogurt makers. You don’t want the food too hot or too cold! The tube is so the food goes down its throat kind of like how its Mum would feed it in the wild. I noticed the chick being fed made strange noises and I imagined it was telling Helen “More! More!” They are fed every day so they don’t starve before they fledge. 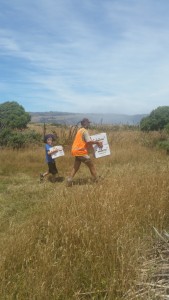 Carrying the chicks to their new home.

100 chicks arrived but on the day I talked to Helen there were only 77 left. 23 had fledged and Helen was happy. Her favourite jobs are measuring the wings and holding the chicks. She explained that when they fledged they go out to sea for two years and learn to feed themselves by catching fish. She hopes they come back to Mana to breed because they fledged from here.

They are doing this so a new population of burrowing sea birds might be established on the island. Dad says these birds have come from Stephens – Takapourewa – Island in the Marlborough Sounds. He explained to me that the aim is for this years (and last years) transfer of Fairy prions to‘top up’ the original translocations started in 2007. He says an already small population had been established, and these extra birds will give it a boost.

I asked him who is involved and he told me Friends of Mana Island (FOMI), OMV sponsors, Ngati Koata (Takapourewa island iwi), Ngati Toa (Mana island iwi) and DOC. 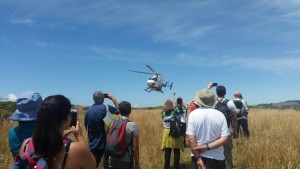 I wondered why is it important and Dad thinks it’s because sea bird colonies bring lots of good nutrients to an island, so are an important part of the islands nature and ecology. He also tells me it’s been going since 2007 and other seabird species have also been translocated in the same way to Mana since 2004 including fluttering shearwaters and diving petrels. Hopefully these last couple of fairy prion transfers will see the population set up for the future. 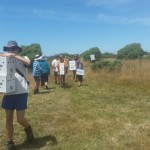 Re-homing the birds was definitely a group effort.

My last question was how do they know if it worked or not? Dad replies “On past transfers success is measured by how many survive to fledge (in this case all 200 of the past two years birds fledged which is great!). Then how many birds return to the island after being at sea for 3-4 years, to then meet up with other birds and breed. Past experience indicates around 30% which is good. When they arrive from Takapourewa they are about 8 weeks old and fledge with 7- 10 days of arrival.”

Helen and the Friends of Mana Island group worked really hard so I hope it works out. Check out this page if you want to find out more about www.arkive.org/fairy-prion/pachyptila-turtur 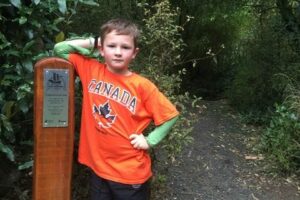 Daniel at one of the Kiwi Guardian posts. 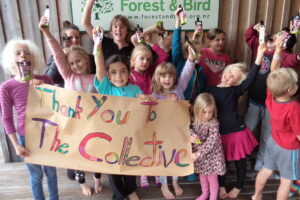 Thanks to The Collective for donating suckies for our camp

A story by Hannah (age 10) from KCC Hastings-Havelock North[...] 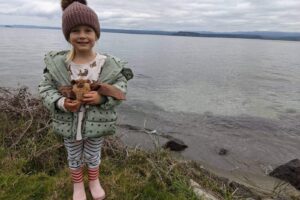