Olive (aged 8) sent in this great story about saving, caring for, and releasing a young starling during the summer holidays…

In the holidays I heard my cat Daisy catch a starling fledgling. It was half dead. I locked Daisy in the bathroom while me, Heath, and Ramona surrounded the starling. After half
an hour Mum said that we could put it in a cage with a basket, a blanket, and newspaper. 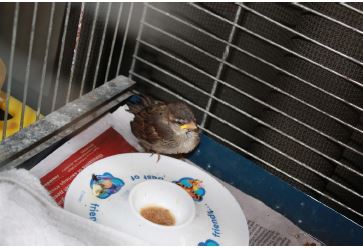 Starling fledgling cared for by Olive and her family.

When the fledgling was in the cage it went to sleep so I put a blanket over the cage. I checked it over and over again until finally it was awake. It had its energy back and it
chirped loudly.

I looked up ‘how to look after a starling fledgeling’ on the computer, and it said that you could feed it scrambled eggs and dry cat biscuits soaked in cold water. So, I made the cat
biscuits soaked in cold water. When they were done I fed the starling, it would not eat anything so I called Dad to force-feed it. Force feed means you hold the starling gently and it opens its beak.  The fledgling was warm and soft it felt like a woolly coat.

After dinner I made a decision. Dad would put the baby starling back in its nest in the roof.

I was heartbroken that I had to let it go, but, it was the right thing to do, and the starling is now just in a hole in the roof.