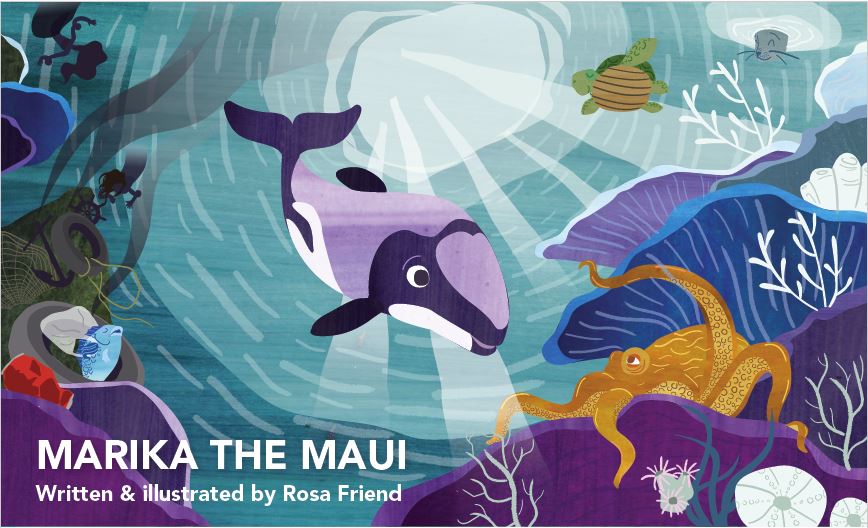 Marika the Maui dolphin swam through the coastal waters of the west coast of New Zealand’s North Island, a once glistening and abundant seabed that was now gloomy and grey, in search of food for her dwindling family. Although Marika was a confident swimmer, she was never allowed to venture too deep for fear of meeting Flotsam and Jetsam – two Sea Witches that tormented the seabed.

As she passed Olly Octopus, he beckoned to her. “Marika, please be especially careful today,” he warned. “I’ve heard whispering that Flotsam and Jetsam are planning on coming closer to our seabed, and claiming more of our water!” A shrill voice followed this warning. “What an outrageous thing to say, Oliver,” said the Minister, a large old blue cod. “Be careful what you say about the Sisters. As you know, they donate a lot of their loot to the seabed.”

The Sea Witches would dump their spoils in the seabed, which the Minister loved to rummage through to find shiny objects or food, leaving only sharp plastic and netting which would trap the other animals. Their “loot” was covered in a thick syrupy oil, a favourite drink of the witches, which they extracted from the deep beneath the sea floor. The oil suffocated the seaweed and coral, and meant Marika and her friends were having to swim farther and farther away from their home for food.

“Rusty would never have let this happen,” mumbled Olly before he darted back into his cave. Rusty was the seabed’s last protector who, legend had it, held a beautiful pounamu, which shielded the seabed from Flotsam and Jetsam. One day he disappeared with the stone, never to be heard from again.

Marika continued on her way. She waved to her friend Kika the kororā, who was diving for fish with her family, and to Honu, the leatherback turtle, who said merrily, “There is plenty of food near the beach this morning, Marika!” Excited, Marika changed course for the beach. The kekeno were lying on the rocks in the sun as she approached. “Ata marie ngā kekeno!” she called as she broke the surface. “Kia ora e hoa,” they all barked.

Marika snapped playfully at the schools of fish, chasing them closer and closer to the shore. As she approached, something caught her eye…Nestled in the sand, half hidden and covered in seaweed, lay a glistening green stone. Marika’s eye widened, and a gasp left her mouth; Could this be the taonga that used to protect the seabed?

She couldn’t wait to find out as she raced home… 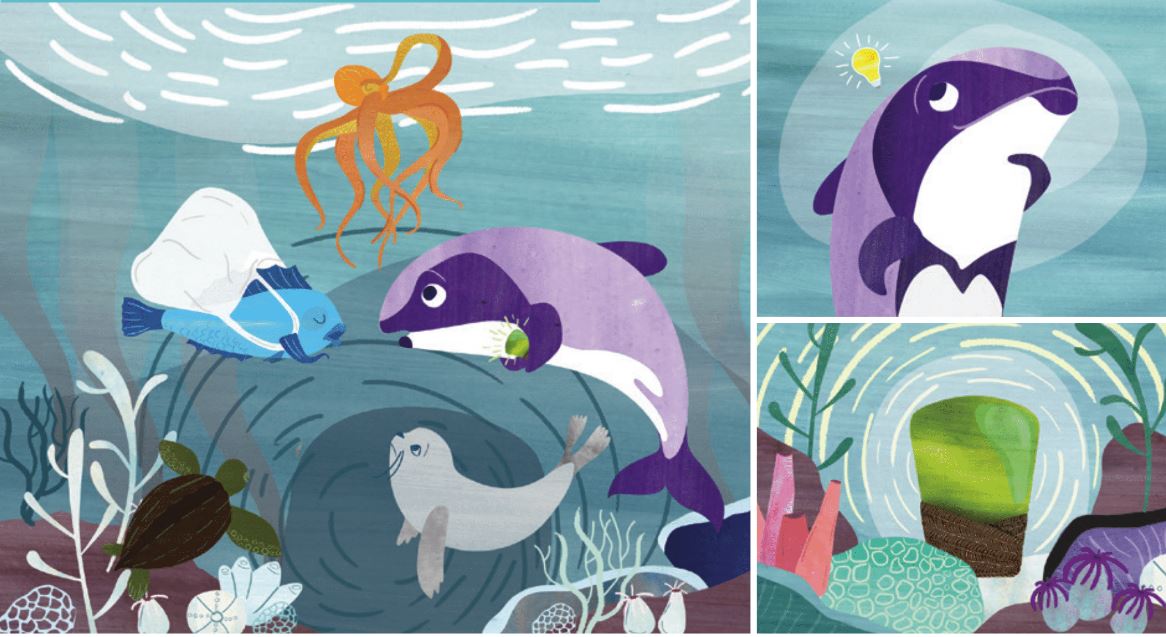 There was a moment’s silence, which she answered by raising the stone into the light, followed by an uproar of cheering from the sea creatures. A green glow lit up the stone, followed by a light that bathed the sea floor. It crept across the seabed, turning nets, oil, and debris into seaweeds and coral.

The Minister darted forward, and snatched up stone. “This stone could be used for all sorts of things. It’s bound to be worth lots of loot too!” he said enthusiastically. “We should tell Flotsam and Jetsam about this find…” The light dimmed, causing the shadows of the deep to once again creep over the seabed.

Marika couldn’t believe it. How could the Minister be so misguided? “Minister, your job is to protect the seabed from Flotsam and Jetsam, not sell it to them!” cried Marika. As she spoke, the pounamu glowed, ever so slightly.

“Without the pounamu, our seabed continues to die; can’t you see the coral?” She pointed to the white coral that was once bright red, blue, and green. The pounamu glowed a little brighter, just enough for Marika to notice.

“Olly you remember how the seabed used to be? Don’t you want that back again?” “I had almost forgotten the colour of the seaweed, and how the fish used to play here,” he lamented. “But I never stopped believing that the day would come again when we would have the chance to make things better…”

Could it be that it is our thoughts, actions, and determination that makes the difference, and not the pounamu itself? thought Marika to herself. Others then started to add their voices to the conversation too…

“The pounamu is for everyone, Minister!” piped Kiko. “We will all benefit from it being here.”

“Let the stone regenerate the seabed, and we won’t have deal with Flotsam and Jetsam’s rubbish anymore,” added Honu.

The glow from the pounamu was now so bright that it bathed the Minister in light. And then, something peculiar happened…

The Minister opened his mouth. Closed it. And opened it again to say, “It would be nice to see the sun’s light shine down through the water again, I suppose.” It was as if the light from the stone had finally given him a clear head.

“Marika, I pronounce you the new Protector of the Pounamu!” said the Minster. “You will make sure it can work its magic on the seabed.” Everyone cheered. However, now confident she knew the truth of the stone, Marika refused the role.

“The pounamu is certainly special, but it’s not what will save the seabed,” she proclaimed. “The pounamu glows when it knows the environment is being protected. The light shows us what is possible if we work together to rid our home of Flotsam and Jetsam. It is us that have the real power to save the seabed!”

With this, the pounamu beamed with light in agreement.

So together, they began to clean up their environment, and banish all traces of the Sea Witches from the seabed. The grey, gloomy shadows in the water grew ever smaller, to be replaced by bright abundant coral.