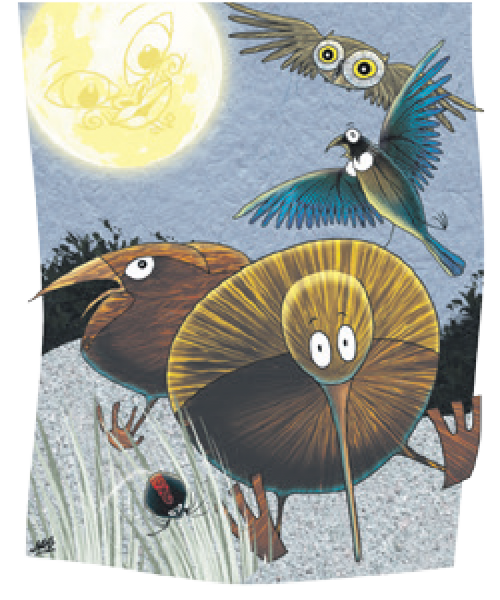 Words and illustration by Nikki Slade Robinson who turned her book The Little Kiwi’s Matariki into this skit especially for Wild Things readers.

The five creatures are around the stage, asleep. KIWI and WEKA are in their burrows. TŪĪ and RURU are up trees. KATIPŌ is in the beach grass. Suddenly, a beam of light shines onto KIWI.

KIWI: (Squinting at the sky) Aue! Who turned on the lights? Oh, it’s you, te Marama. But you only shine in my burrow once a year. That means… I’d better get a move on!

KIWI emerges and rushes around, calling.

WEKA: (Waking up) Eh? But I was dreaming of kai reka, yummy food, and I was just getting to the
dessert. What’s the panic?

KIWI and WEKA rush around together.

RURU: Eh? But I was dreaming of my whānau, my family, coming home. What’s the rush?

KIWI, WEKA and RURU rush around together.

TŪĪ: Eh? But I was dreaming about winning X-Factor with my waiata, my song. What’s going on?

KIWI, WEKA , RURU, and TŪĪ rush around together.

KATIPŌ: Eh? But I was weaving a new pattern in my dreams. What’s up?

KIWI, WEKA , RURU, TŪĪ, and KATIPŌ rush around together.

KATIPŌ: Chill. It’s just Tāwhirimātea, God of the Wind, waiting for us.

KIWI: Um, I knew that. Not scared at all.

KIWI, WEKA , RURU, TŪĪ, and KATIPŌ move forward, gazing out at the horizon, and gasp.

TŪĪ: Time for waiata and kanikani, song and dance!

KATIPŌ: And time for flying my webbed pākau, my kite!